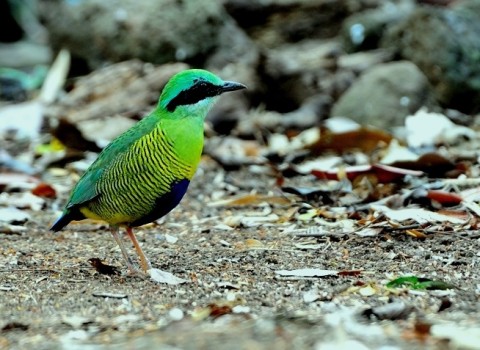 The option of Vietnam birding and culture combination tour is a full-on birding tour or are travelling with a non-birding partner or friends we will create a personalized tour for you combining the best of Vietnam’s birding with the best of its culture including historical sites, river cruises, ethnic minorities, cuisine, beaches, mountain retreats, spa resorts, cycling, in fact whatever you want

Hanoi, the capital of Vietnam, is known for its centuries-old architecture and a rich culture with Southeast Asian, Chinese and French influences. At its heart is the chaotic Old Quarter, where the narrow streets are roughly arranged by trade. There are many little temples, including Bach Ma, honoring a legendary horse, plus Dong Xuan market, selling household goods and street food and shopping.

Halong Bay is a UNESCO World Heritage Site and one of the natural wonders of the world. At noon board the Bhaya, a luxurious oriental cruise boat. With comfortable air-conditioned cabins, a restaurant, bar and a sundeck this is the ultimate Halong Bay experience. After a sumptuous buffet lunch enjoy the wonderful natural scenery while relaxing on deck or exploring some of the spectacular caves on a shore excursion. Other options include kayaking, spa treatments and a cooking demonstration

About 2 hours from Hanoi to Van Long Nature Reserve en route. Take a sampan through flooded rice fields to the dramatic limestone cliffs that are home to the largest population of one of Vietnam’s critically endangered primates, Delacour’s Langur. Then driving to Cuc Phuong national park- the first national park to be established in Vietnam, Cuc Phuong is an area of limestone hills covered in primary rainforest. The best birding is in the centre of the park where there are several excellent trails including the Loop Trail and the Valley Trail. The main road through the park can also be very productive especially for over-wintering thrushes early in the morning

After breakfast and morning bird watching in the park, we are going to Noi Bai Airport then taking a domestic flight to Hue City -the UNESCO World Heritage where the Nguyen Dynasty ruled between 1802 and 1945 and Thien Mu Pagoda with its seven-tiered tower.

Bach Ma National Park is situated in the Annamite Mountains. Its mountains are composed mainly of granite. Bach Ma’s position, at the bio-geographical border between northern and southern Vietnam, combined with its variety of habitats, ranging from the coast to high mountains, means the park is rich in biodiversity. It is located in an area that is considered a center of plant diversity in Vietnam. The main vegetation type is moist evergreen and montane forest, as well as areas of scrub and grassland.

After birding in the morning at park, we take a drive through Lang Co bay and Lap An lagoon heading to Monkey Mountain for Red-shanked Douc Langur and some birds at the mountain.

Ancient and peaceful, Hoi An is one of the most popular destinations in Vietnam that caters to travellers of all tastes and across the continents. In 1999, UNESCO formally recognizes Hoi An as a World Heritage Site. There are the things that make up the reputation. Hoi An is home to many temples, pagodas and the ancient homes that bear its very unique mark. The density of such sites is unlike any other in Vietnam. In the afternoon take a walking tour of the ancient town centre to visit former merchants’ houses, the 400 year-old Japanese Covered Bridge, a Chinese communal hall and the colorful market. Enjoy with the lantern festival at night.

Day#12 Hoi An Birding At The Wetland and Beach Relaxing

Day#13 Take A Domestic Flight From Hoi An – Da Lat

The plateau reaches elevations of over 2,000 meters, making it much cooler than the surrounding countryside . This is among the best places to find endemic birds in Vietnam.

Leaving Cat Tien in the morning to Ho Chi Minh City as known as named Sai Gon. Take a city tour to visit War Museum and the city in this afternoon.

Head to the Mekong River on this full-day excursion to experience the trading culture of the people who live by the river and make their living from it. See local production activities and the busy and noisy Cai Be floating market and enjoy a tasty lunch

Price: To meet your expectation and full experience about wildlife tour, please email us for more information